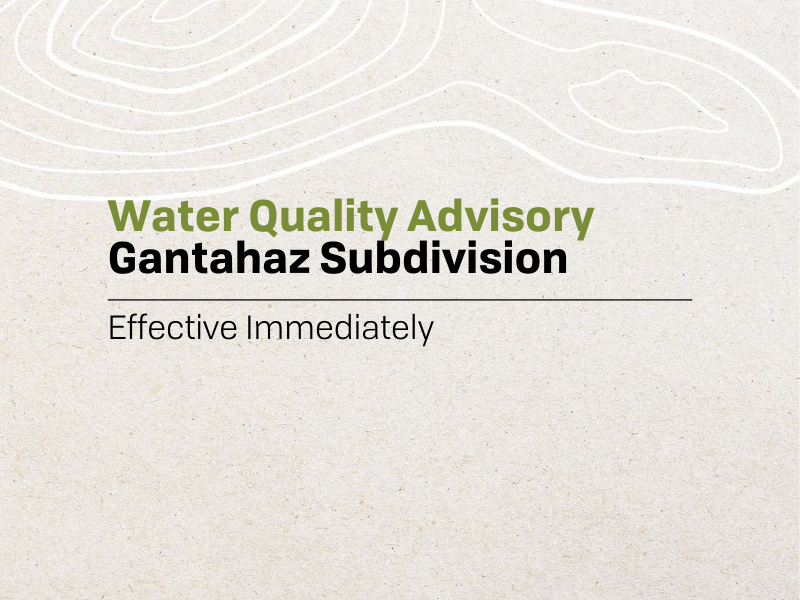 The District of Mackenzie is issuing a Water Quality Advisory (WQA) for the Gantahaz Subdivision, due to the levels of manganese in its drinking water supply.  A WQA is the lowest-level notification. A WQA is used in situations where the public health threat is modest, and actions can be taken to reduce the risks by ways other than a “boil water notice”.

While the quality of Gantahaz’s drinking water has not changed, the Guideline for Canadian Drinking Water Quality (GCDWG) has. Manganese in the water supply in Gantahaz has been measured at levels of up to 2.26mg/L, which was a one time hit. The average test levels have been 0.129mg/L to 0.145mg/L. The Canadian Drinking Water Quality Guideline for manganese is 0.12mg/L

Manganese is an essential element (or nutrient) for all living organisms and is present in various kinds of foods as well as some drinking water sources; consuming a small amount of manganese from food or water is needed to stay healthy

Out of an abundance of caution Northern health would like water users to be aware of the following:

The District of Mackenzie tests water regularly in accordance with Provincial requirement and the GCDWQ.  Last year sampling for manganese was increased to better assess manganese concentrations prescribed within the GCDWQ. On review of the results, it was determined that a Water Quality Advisory was best suited to inform potentially impacted Gantahaz community members.

The District of Mackenzie is actively working with Northern Health to develop strategies to reduce the concentration of manganese within the distribution system.

Copies of the WQA and resources are being hand-delivered to residences in the Gantahaz Subdivision today.

For Further Information about the Water Quality Advisory:

For those who would like more information, the following links offer more information about manganese in drinking water and the Town’s Water Quality Monitoring Program overall:

Future updates will be posted on the District of Mackenzie's Water Services webpage and News and Announcements.