You could say we're resource-ful.

We were built with resource industries in mind! Mackenzie is a planned community, with its industrial site located in a separate area outside of the populated town-site. The industrial area is served by road, rail and water transportation on Williston Lake. The location also ensures industrial noise and air emissions are separate from the community residents.

Mackenzie has a wealth of opportunities for growth in the Natural Resources sector and our team is always eager and available to help new business or industries thrive here.

At a quick glance, some of the broad opportunities include:

While Mackenzie supports a wide range of industries, the key opportunities for natural resources lie in Forestry, Mining, and Oil & Gas Pipelines construction. Read further for a more in-depth look at each of these sectors in Mackenzie. 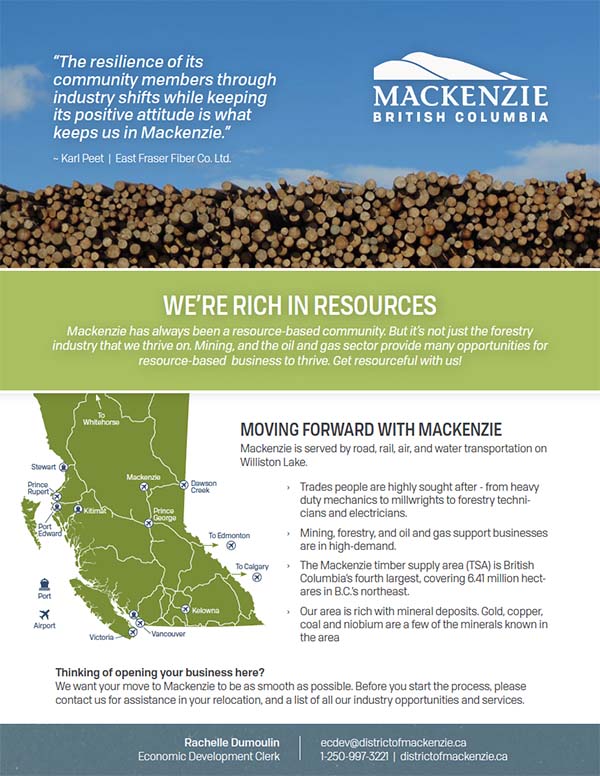 We think Mackenzie's pretty special - but don't take our word for it...

“The resilience of its community members through industry shifts while keeping its positive attitude is what keeps us in Mackenzie.”

Also, we run our own community forest to boot!

The Mackenzie timber supply area (TSA) is British Columbia’s fourth largest, covering 6.41 million hectares in B.C.’s northeast, and is one of only two TSAs in the Omineca Region. It is administered from the Mackenzie Natural Resource District office. The Mackenzie TSA’s allowable annual cut is 4.5 million cubic metres as of November 14, 2014. The forests of Mackenzie are fairly homogeneous, with lodgepole pine, spruce, subalpine fir and several deciduous species comprising the majority of the TSA. Generally, a new allowable annual cut is set at least once every 10 years.

There are several industrial forest manufacturing facilities operating in Mackenzie including:

For a listing of all the forestry and forest products firms in Mackenzie, see the Chamber of Commerce Business Directory.

Established in 2009, our community forest agreement grants the McLeod Lake Mackenzie Community Forest Limited Partnership the right to harvest up to 30,000 cubic metres of timber per year on 24,664 hectares of public forest lands in the Mackenzie timber supply area. The partnership is jointly operated by the District of Mackenzie and the McLeod Lake Indian Band. The community forest has five separate parts, the largest of which is 8,296 hectares, just north of McLeod Lake. Learn more at www.mlmcf.ca

There's gold in them there hills! Mackenzie is in an area rich with mineral deposits. Gold, copper, coal and niobium are a few of the minerals known in the area, with a history of the Omineca Gold Rush North of Mackenzie (Manson Cr), and many explorations and claims made since.

The Mount Milligan Mine west of town employs approximately 80 Mackenzie residents, and takes advantage of the rail transportation to BC ports to ship its minerals overseas.

There's gold in them there hills!

Mackenzie is in an area rich with mineral deposits. Gold, copper, coal and niobium are a few of the minerals known in the area, with a history of the Omineca Gold Rush North of Mackenzie (Manson Cr), and many explorations and claims made since.

Mount Milligan Mine, Centerra Gold
The Mount Milligan Mine is a gold-copper mine, located just 98 km from Mackenzie, started operations in Fall 2013. The concentrate of minerals from the mine is trucked to Mackenzie and loaded onto train cars, then shipped overseas for refining. Mount Milligan has contributed to the direct employment of more than 500 full and part time workers, including approximately 80 people that live in Mackenzie. Mount Milligan spends approximately US$62 million in local goods and services, fueling the local economy.

Numerous pipelines have been proposed to transport natural gas from sources in northeast BC and Alberta to the coast of BC. Mackenzie is well-positioned to substantially support (and benefit from) two of the major pipeline projects.

Mackenzie could play a major role in the Province's LNG Strategy. The Province of BC is working with industry on developing Liquified Natural Gas (LNG) terminals near Kitimat and Prince Rupert.

Pipelines proposed across BC

Two main pipeline grouping systems have been proposed - the Kitimat lines run across BC south of Mackenzie and the Prince Rupert/Port Edward lines run across BC north of the Mackenzie District boundary. The natural gas is proposed to be transported via pipeline to facilities where it is cooled to become liquid. This liquid LNG would then be transported to overseas customers from those ports.

Numerous pipelines have been proposed to transport natural gas from sources in northeast BC and Alberta to the coast of BC: Download the LNG BC Pipeline Map (PDF, 1MB)

What does it mean for mackenzie?

Two of those proposed pipelines Trans Canada and Enbridge, (the Enbridge proposal is a twin line, so possibly three pipelines) cross the province of BC just on the northern edge of the Mackenzie District boundary. Mackenzie is the farthest north rail service point for a large portion of these projects (pipe construction from Rocky Mountains, under Williston Lake, over to rail head access by Ft St James).

As the far north rail point for this section, Mackenzie is being considered as a rail laydown and transload site for pipe that is shipped by rail as close to the pipeline project as possible. Mackenzie may also play the role of service centre for these projects during construction.

Mackenzie's Mayor and Council continue to prepare for natural gas pipeline developments near Mackenzie in efforts to minimize impacts to the community and environment while maximizing the short term economic benefits. These pipeline projects may have a positive economic impact on Mackenzie for a three to five year period during construction. Council is currently reviewing worker camp issues and worker accommodation opportunities in other communities. 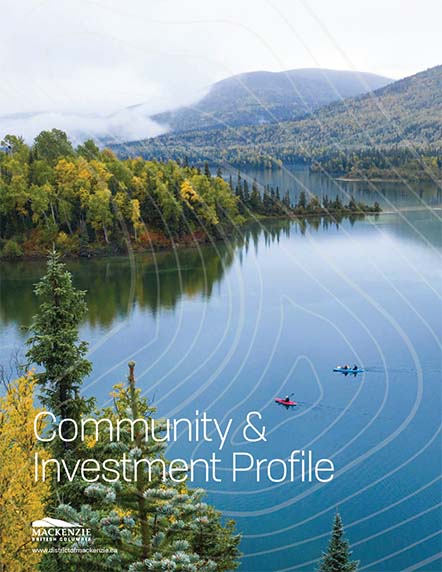 Spotlight on Natural Resources in Mackenzie